We especially need imagination in science. It is not all mathematics, nor all logic, but it is somewhat beauty and poetry. — Maria Montessori

Prior to her study of medicine, Dr. Montessori had an extensive background in mathematics, engineering and biology. After studying philosophy, psychology and working with several different groups of children, she created innovative tools designed to stimulate the growth and development of young minds.

Dr. Montessori implemented this learning method within several groups of children and discovered a very effective improvement on the existing standard of education. Believing that every child is unique, Dr. Montessori’s method is built on a foundation of fostering and respecting individuality throughout the entire education process.

If placed in the proper environment children will “normalize” which means that they will develop into whole, peaceful adults with an inherent love of learning.

In order to facilitate the total development of personality within the fundamental period of growth, children must have freedom. In order to develop his or her personality to the fullest, this freedom is achieved through work, order and self-discipline.

The world of the child is full of sights and sounds, which at first appear chaotic to the young and impressionable mind. From this chaos, children must gradually create order and learn to distinguish among the impressions that assail their senses — slowly, but surely gaining mastery of themselves and their environments.

Rather than introducing concepts to children, the Montessori Method develops an environment where the child’s personality can unfold, develop and flourish.

At the heart of the Montessori Method is an environment that not only stimulates the child’s interests, but also allows the child to work independently, which in turn nurtures the child’s love of learning.

The Montessori Method helps children develop at their own speeds, according to his/her own capacities, in a noncompetitive atmosphere. To develop confidence in the child’s search of knowledge, the Montessori environment also encourages children to partner with one another in their search for self.

Why the Montessori Method Works for Early Childhood Education in Riverside, California 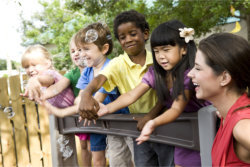 Rather than introducing concepts to children,

the Montessori Method develops an environment

where the child’s personality can

Read about other parents’ experiences with our programs